I found this bit of idiocy on the web today:

In case you don’t know, Bondi is referring to the amazing Supreme Court decision that came down on Monday, letting the states know that it constitutes an 8th Amendment violation to sentence juveniles to mandatory Life Without Parole (LWOP).  I, for one, am very glad to see this happen. It seems to me that sometimes youth get sentenced more harshly than adults who commit the same crimes.

I think the reasoning boils down to “because we can”. It’s “in loco parentis” gone wild.

But don’t think Pam Bondi stops with wishful thinking about how wonderful youngsters find the Florida prison system. She’s not content until she paints Florida youth as some kind of raging torrential virus rampaging across the state. I don’t know what’s in the water down there, but as far as she’s concerned, we should all be VERY AFRAID of the kids:

Huh. That’s interesting. She must have a reason for encouraging Florida residents to quake in their boots at the sight of a teenager. The crime statistics there must be out of sight amazing to behold.

Except that they’re not. In fact, it turns out that juvenile crimes, even really violent ones, have been on the decline across most counties in Florida. Did I learn this from some site run by wacko leftist socialists? 🙂 Nope. These stats are provided to you by the Juvenile Justice Division of Florida. Here, take a look at the summary:

View this document on Scribd

Felonies dropped by six percent, and even violent felonies have been enjoying a three year decline. Not exactly the picture of a state under attack by kids who can’t be stopped.

According to the Miami Herald, 2,100 kids are currently in prison because they went to court in states where they faced mandatory life without parole sentencing for their crimes. What that meant was that the judge or jury couldn’t look at any mitigating circumstances or take anything into account. If they did it at all, then it’s LWOP for them!

This is what bothers the Supreme Court a lot. They say in the summary that life without parole as a default sentencing is a cruel and unusual punishment violation because individuals are supposed to have the right to “not be subjected to excessive sanctions“. They also hold that “punishment for a crime should be graduated and proportioned to both the offender and the offense“.

The biggest reason I find hope in this decision is the case of Cristian Fernandez. This young boy was arrested at the age of 12 and charged with the murder of his younger brother. He’s the youngest person in Jacksonville history to be tried as an adult. He’s 13 now, having spent his birthday in isolation at the Duval County Jail.

Angela Corey, who is currently prosecuting George Zimmerman, has said it’s necessary to charge Cristian as an adult in order to “protect” the rest of the community from him. Yes, by all means, let’s protect the world from this boy: 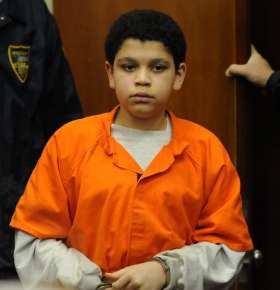