I read this article today about banks starting to charge $3/month fees for using your debit cards. It’s not all banks, and not all states (yet). But it is Wells Fargo (where I bank) and it is Washington State (where I live). I wasn’t too sure what to do about it. After all, I started up with WF because they have branches everywhere I have people, including rural Michigan. A lot of folks have been saying that it’s time to move our money to credit unions and local banks, but I didn’t think would work for me.

And then I saw that Salal Credit Union is part of a nationwide network of Credit Union ATMs. Apparently, a lot of them have agreements with each other to honor transactions. Including one in rural Michigan. Where I have people. And where I was a member growing up. So now I’m thinking about it.

One of the organizations working on this back to the credit unions and local banks/divorce the giant corporations movement put up this video on YouTube:

Do you think it’s time to move our money?

Seems like the only people who can safely pray in public spaces are those who wave giant horridly tragic signs of diced up fetuses (feti? feetii?) or hate the gayz. When some Christians gathered around to ask God to protect the poor among us in this self-induced debt “crisis”, they were arrested.

I won’t say much here, because others do it better. I’ll just point you to the links:

I will leave you with one quote that really struck me:

“There seem to be several ‘givens’ in this debate,” Ramirez said, according to an e-mail from his office. “For Republicans, no new taxes is a given. For some Democrats, no cuts in Medicare are a given. For others, no cuts in military spending is a given. For your administration, some additional revenues are a given. Sadly, if you listen to the debate it seems that protecting the poor and vulnerable is not a given. That is why we are here.”   Bishop Ricardo Ramirez of New Mexico

This whole debt ceiling hostage situation has me furious, sad, worried, and a ton of other things. I think about this every single day. It feels like there’s not much any of us can do to stop it. We’re contacting our folks in D.C. in such droves that we crashed their systems. We call in to shows, talk to each other over social media, and make all the preparations we can out here in real world. And still, the Un-American brats in D.C. vow to steal from veterans, disabled people, and the elderly because the suffering of the rich would just be too much to bear. Impeachment for treason should be the order of the day, but somehow it’s not.

What are us real Americans to do? We’re the ones out here trying to build lives for ourselves, our friends and our families, no matter what ridiculous slaps in the face they give us. Our civil liberties have been eroded in the name of national “security”, those of us who are poor have been blamed for everything, and politicians across several states are doing their best to make sure that “undesirable” people cannot vote in the 2012 elections.

And then this afternoon, I saw something. A comment on a New York Times article that has some potential. Let me put it up for you:

“If the US defaults, guaranteeing interest rates go up, I give up. And by that I mean, if my own country is refusing to pay its bills, I’m refusing to pay mine. I’m declaring bankruptcy on August 3rd if they don’t raise the debt ceiling by August 2nd. I’ve been slowly and steadily paying my credit cards bills down, even as my bank has hiked my interest to 29.99% APR. It’s taken me five years to pay off half of my debt, and probably will take me another five years to finish paying it off. Believe me, it’s hard, but I thought it was the right thing to do. By why should I bother if my own government won’t pay its bills?

Also, if they’re going to put social security and medicare on the table, programs I’ve paid into for 20 years, and they’re not going to be there for me when I retire, I’m going to need to start saving for retirement right now. It might destroy my credit rating to declare bankruptcy, but… that won’t matter if I can’t ever afford to buy a house or a car anyway. I am sick and tired of politicians protecting the wealthy while income inequality gets worse, and the middle class struggles harder and harder with fewer and fewer safety nets. Middle class income has been flat for 30 years while the fruits of our labor were enjoyed by the wealthiest. Our protections against banks have been stripped away, and we’re losing unions, access to affordable healthcare, and benefits we paid for to be there for us.

I think we should all immediately contact our congress person and say if the US is defaulting on its bills, so are we. That might be the only way to get some pressure from Wall Street to raise the debt ceiling. If Republicans can threaten to ruin our economy, we can threaten to ruin the bankers’ profits. If that’s a fair negotiating strategy for Republicans, bring it on from the rest of us.”

So the basic idea is to drop our debt if our Congress thinks dropping their’s is such a great idea. I have to admit, as much as I’m for personal responsibility, this would be something I’m in favor of. After all it may only get harder to declare bankruptcy in the next few years anyway. We all saw how the laws allowing us to do that got tightened as things got harder financially.

Perhaps a complete reset is in order. I’m going to turn the comments back on so there can be discussion back and forth. But let’s have real talk about the costs and benefits of it ok? Not just basic superficial soundbites about “the need to be responsible not matter what” or “yeah, man *&%$ the GOP!”.

By now this isn’t exactly breaking news, but the anti-choice group Life Always has been making waves with billboards across the country. Those billboards look like this: 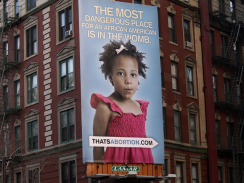 Several great posts from people I really respect have already been written about how these billboards are yet one more attack on black mothers. Black women who blog are saying the obvious: shaming black women is not going to stop abortion, and money spent placing these racist, anti-woman ads in communities of color could be better used. You know, doing silly things like getting better basic healthcare for poor women, helping black women find good living wage jobs, setting up childcare collectives, etc.

All the kind of things that would help lower the rate of abortions by raising the standard of living. Here are blog posts by some of the affected women who say it much better than I could:

And closing the testimony of black women, here is Rep. Gwen Moore from Wisconsin telling anti-choice people about her own personal experience. She talks about her life, and says that they need to leave funding alone to help women, especially women of color, survive.

As a white transgender guy, what’s my dog in this fight? Why should I care about a bunch of people misusing statistics to harm black folks? After all, I don’t live there. They’re not shaming me personally. Most of my black friends are women, and Mrs Linc is also a black woman. Is that enough? Emphatically yes, but there’s much more to it.

These ads are just more of the same scare and shame tactics the far right are engaging in across issues. From LGBT rights to labor, a woman’s right to choose to cutting so called “entitlement” programs like Medicare/Caid and Food Stamps to “save” money, there is a war being waged in America today. If you are not white, rich, straight, able-bodied and born male, your right to exist is doubted. The idea that you deserve to live a full, vibrant life is laughable. Twisting statistics is a common tactic in this war. The sad part is that as long as the sound bite goes down smooth enough, most people won’t even question it.

Here are stats on abortion from the Guttmacher Institute. http://www.guttmacher.org/pubs/fb_induced_abortion.html They are a nonpartisan international reporductive health research and policy organization. Their FAQ page talks about how they maintain objectivity, how they get data, and where their money comes from. http://bit.ly/eeSILv Some people say they are a tool of Planned Prenthood. This may be because the man they were named after was president of the org during the 60’s.

Another false stat is that abortion is dangerous to women because it causes breast cancer. But the American Congress of Obstetricians and Gynecologists has found that there is no link. http://bit.ly/eQEXI3

All of this, including this latest debate over shutting down the government because the right was determined to defund Planned Parenthood, is a war on women. It’s that simple. The statistic twisting, shaming of poor mothers and women of color, and wanting to balance the budget on the backs (and uteruses or uteri) of poor people reveals that. Come on, the real truth of the matter comes out when a legislator gets rebuked for saying the word UTERUS. http://bit.ly/f1K0Dp

Because now talking about the body parts of teh womenz is yucky and gross. Second grade playground/boys only clubhouse crap anyone?

And though the Democrats may have stood up for Planned Parenthood nationally, DC funding got stripped. And the right is not done going after PP. This amendment was just entered http://bit.ly/guDALD